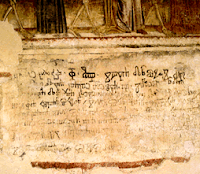 A famous mistranslation of the Bible is the rendering of the Hebrew word קֶרֶן (keren), which has several meanings, as "horn" in a context where it actually means "beam of light". As a result, artists have for centuries depicted Moses the Lawgiver with horns growing out of his forehead. An example is Michelangelo's famous sculpture. Some Christians with anti-Semitic feelings used such depictions to spread hatred of the Jews, claiming that they were devils with horns.
Saint Jerome, patron of translators (and of encyclopedists)

One of the first recorded instances of translation in the West was the rendering of the Old Testament into Greek in the third century B.C.E. The resulting translation is known as the Septuagint, a name that alludes to the seventy translators (seventy-two in some versions) who were commissioned to translate the Bible in Alexandria. Each translator worked in solitary confinement in a separate cell, and legend has it that all seventy versions were identical. The Septuagint became the source text for later translations into many languages, including Latin, Coptic, Armenian and Georgian.

Saint Jerome, the patron saint of translation, is still considered one of the greatest translators in history for rendering the Bible into Latin. The Roman Catholic Church used his translation (known as the Vulgate) for centuries, but even this translation at first stirred much controversy.

The period preceding and contemporary with the Protestant Reformation saw the translation of the Bible into local European languages, a development that greatly affected Western Christianity's split into Roman Catholicism and Protestantism, due to disparities between Catholic and Protestant versions of crucial words and passages.

Martin Luther's Bible in German, Jakub Wujek's in Polish, and the King James Bible in English had lasting effects on the religions, cultures and languages of those countries.
See also: Bible translations and Translation of the Qur'an. Source